The central area of the game screen between the Upper bar and the Lower bar, contains the map of the game : 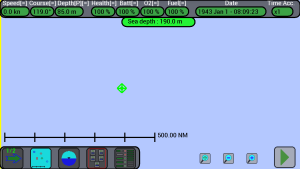 At the center there is the symbol of your submarine.

Size of the map :

The game takes place inside a large square area of sea with the side long 1000 miles (1000 NM) and to see it all, you can move the map on the screen and enlarge it.

, at the bottom of the screen.
The border of the map is marked with a yellow outline that you can see on the edge of the screen when you moves it all in one direction, and the map will change color depending on the time of day (Blue during day, dark blue during sunrise and sunset, gray at night).
You can not rotate the map, the North is always at the top, the South at the bottom, East on the right and West on the left.

The map can be shown with or without terrain, press on the map button

in the lower bar to change the visualization mode :

1) Map without terrain, use this mode to not be confused by too many colors:

2) Map with terrain, use this mode if you like it, but the refresh can be a bit slow : 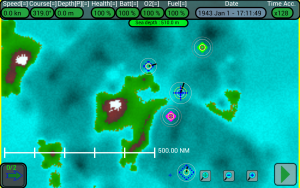 Your submarine is always visible in the map, while the other units are visible only if they have been detected.
The other units are first invisible, then appear in gray when they are detected and change color when they hare identified (blue = allied, red = enemy, black = neutral).
When a unit is out of your sensors ranges, after 4 hours it disappears from the map.
Note: when units identify other units, they report it continuously via radio, if you are at surface at least 500 miles (500 NM) from an allied ship you are able to pick up the signal and these other units will appear on the map !!

in the lower bar to select and center your submarine in the map.

To get an idea of distances, especially when you zoom in or out the map, at the bottom of the screen there is a scale drawn with a horizontal line and small vertical segments. 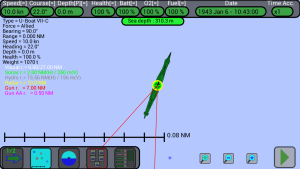 In the middle you see the drawing of the submarine with very enlargement.

Representation of the units :

The various units are indicated on the map in a different way (see Units for full details), depending on if they are allies or enemies, the type of unit, the size of the unit, the zoom of the map and so on :
Normally they are marked with a symbol (diamond, square, etc..), but when they are identified and when the map is zoomed the alley and enemy units are indicated with a more detailed drawing.
If a unit is out of your sensors’ range it is indicated with a dashed symbol, its position is calculated based on the last detection and is maintained on the map for 4 hours.

The size of the symbol is great for large units, small for small units :

The colors of the symbols are :

When the units are detected and then identified, and the map has a great magnification, the color of the drawings is as follows :

When the units are in motion, together with the symbol appears a black line of length proportional to the speed and oriented toward the direction in which the unit navigates. 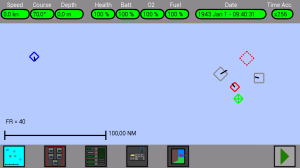 It is possible to select your submarine or other units by touching them on the map, when a unit is selected the info panel appears on the left side of the screen with useful information for that unit (see the table below):

And around its symbol other bigger and colores circles appear, they represent the range of the sensors and weapons of the selected unit; the color used are the same as in the information panel on the left (yellow for radar, white for sight, red for cannon etc.). 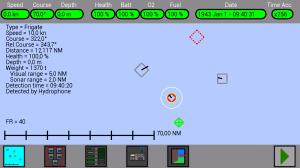 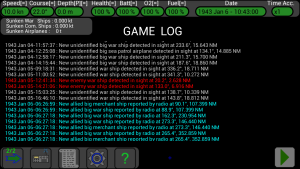 The scope of the game is to destroy as much enemies units (RED SYMBOLS) as possible, and in future probably will be possible to use this tonnage to upgrade your submarine (or perhaps to buy other submarines to be used concurrently to perform advance attacks)…