How to launch the torpedoes :

The torpedoes can be launched from the 5 tubes of your U-Boat (4 in the bow, 1 in the stern) when the submarine is at surface or at periscope depth, using the 5 buttons in the Torpedo Launch window :

If the tubes are empty (because they are still reloading, or because your U-Boat does not have torpedoes), or if the U-Boat is not at surface (0m) and not at periscope depth (8m), these buttons are disabled : 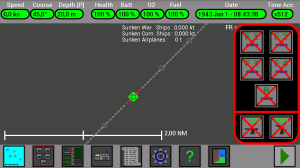 To make the launch easy and satisfactory, some lines and circles are drawn on the map, coinciding with your U-Boat and the other ship selected : 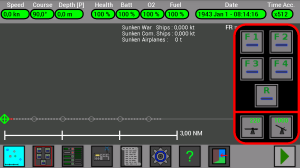 When an other ship is selected, a line with 5 circles is drawn in front of the ship. 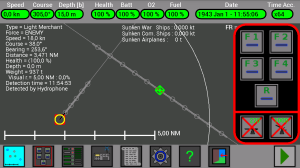 The figure below shows a torpedo launched at the exact moment, it will hit the ship : 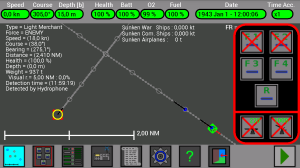 When the torpedoes are launched, they are not immediately ready to explode, they need a short time to become active. 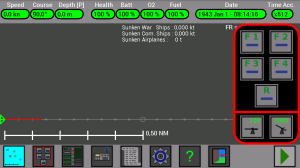 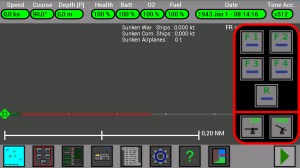 While the torpedo is in the red zone of the line, it is not yet active and can not explode.

Usually when you launch a torpedo you can ignore this detail, it is useful only when your U-Boat and the ship are really near.

Note: the enemy warships often (with their sonar) detect the torpedo incoming and are able to change course in time !

Sometimes, however, launching a torpedo at an enemy warship too close could prevent you to go in time down into the deep to avoid depth charges …..
The range of the torpedo is about 2.7 miles (2.7 NM).

How to choose the torpedoes course : 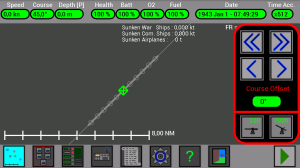 With these buttons you can set the Course Offset of the torpedoes, before the launch, from -180° to +180°. 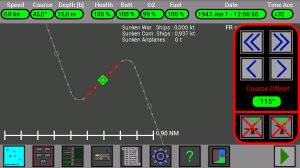 When a torpedo is launched, it will run straight for 250m (0.135 NM) and then it will turn to the left or to the right, to follow the choosen course.

When a torpedo is launched it remembers its setting, so it is immediately possible to set a different course for the next torpedo without waiting : 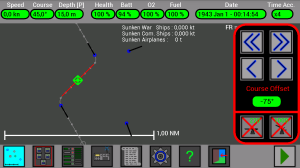